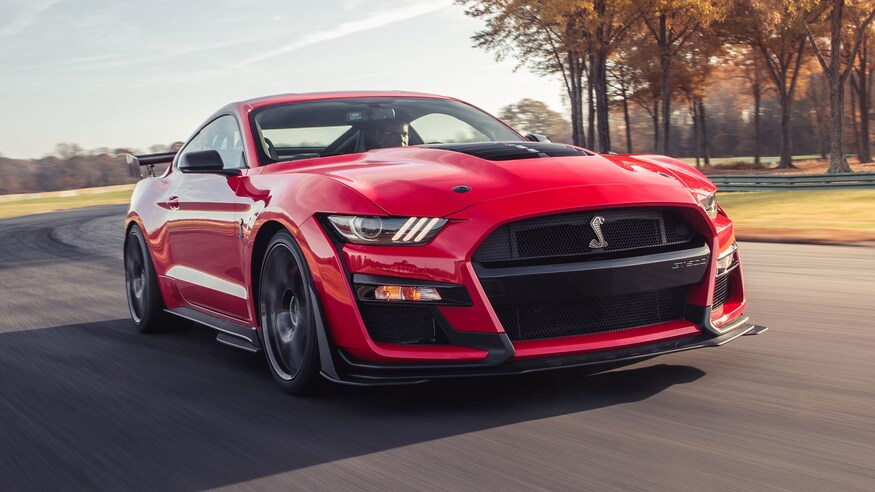 Since its introduction in 2015, the current-generation Mustang has moved Ford‘s nameplate upmarket in terms of performance—culminating in the latest, greatest 2020 Shelby GT500. In MotorTrend testing, we’ve found that the S550 platform has evolved from mere pony car to comparing favorably with premium GT offerings from foreign nameplates.

However, we’ve also learned that, on the racetrack, most current Mustangs still fall a little short—excepting the rev-happy, finely balanced Shelby GT350 that finished second in our recent Best Driver’s Car competition.

Enter the biggest, baddest Mustang ever, with a newly supercharged heart. The just-released GT500 comes with great expectations, because the numbers on paper grab attention. So does the price. Ford offers both the standard version, and the Carbon Fiber Track Pack, a hefty $18,500 option.

How do they measure up? We went to VIRginia International Raceway to grab the reins and yell, “Giddyup!”

Boy howdy, does the GT500 ever run for the roses. Ford claims 625 lb-ft of torque and a muscular 760 hp, and every one made itself known as the Mustang devoured the long back straight at VIR, touching 170 mph, lap after lap. No power fade here, like some other American blown V-8’s making similar numbers (ahem, Corvette C7 ZR1).

The Ford engineers expressed pride in their control of temperatures, both in the intake manifold and throughout the driveline. The GT500 is another one of the new breed of supercars (yes, even a Mustang now deserves that moniker) that actually make the straightaways a thrill, even to a well-versed warhorse like me.

It’s still the Coyote-based 5.2-liter V-8, supercharger mounted up top, but interestingly, back to the cross-plane crank down below. This is a welcome return, due to my own concerns about vibration from the GT350 version at extended high revs. It belts out a stirring bellow, or calms to quiet as a mouse, with just a switch of the electronic valves in the dual exhaust, allowing you to decide whether or not to wake the neighbors.

All that thrust goes through a new Tremec dual-clutch seven-speed that exhibited fine behavior on the street, as well as flat out. Manual shifting during a hot lap is just a distraction, and the GT500’s auto mode rivals Porsche‘s PDK (yes, really) and does everything I would do, anyway. It even had the savvy to hold a higher gear in places, rather than constantly throw out raucous downshifts. On straights, there’s a rewarding “over-torque” feature that gives a little extra shove on each shift, like a manual power-shift. Yet, in corners, I felt the Tremec smooth those out. Impressive. The track program is really dialed in. Again, justified pride from the Ford guys.

The shifter is a twist knob, however, like many garden-variety Fords, and I personally hated it. Not sporty! If we cannot have a manual, Ford, at least let us grab a stocky retro lever and slap this super-pony into drive.

This massive thrust twists a trick carbon-fiber driveshaft into a Torsen gear-type limited slip—a good choice for a front-engined chassis, because it doesn’t lock up much off power. This helps get the GT500 pointed into the turn, and it’s also a non-wear item, unlike the clutch-type diffs.

The powertrain is the same on both models, controlled by four driving modes: Normal, Sport, Track, and Drag, which further includes a line-lock for tire warming and crowd-wowing burnouts, plus launch control for you quarter-milers. And that launch control has an always-on mode for street driving, so you don’t have to fiddle with buttons at a green light. I enjoyed that in downtown Raleigh. It’s hard to find fault with this dual-clutch in all modes, except that I cannot speak for Drag mode.

Stopping this rig were perhaps the largest rotors (16.5 inches) and Brembo calipers I’ve yet to experience. Over 4,200 pounds and 760 ponies demand them. While the big Shelby could dive deep, deep into the tight corners with which VIR shuts down its long straights, it was here I could find my only real complaint: a bit of a long brake pedal, which was a little disconcerting for me at 170 mph. No fade, but some squish. They even bled the brakes for me, yet both test cars felt spongy. This was surprising because I recall complaining that the GT350’s brakes were too strong, requiring only a big toe. Perfect would be somewhere in between.

On to the suspension, the street GT500 first. Mounted with Michelin Pilot Sport 4S street tires and alignment, this Shelby did a terrific job of turning that monstrous power into forward acceleration. The power dominates the driving experience, and demands a slow squeeze on the throttle, which had a very linear delivery in Track mode, a proper e-throttle strategy.

At full gallop, the balance was a pleasure if the driver remained very responsible with the great power under that right foot. Responsive and stable. The MagneRide shock system soaked up the curbs and bumps, but floated a bit under the loads of pro speeds. Happily, though, when the PS4S tires did break loose, it was mostly a gradual, even enjoyable experience.

I was so pleased with what this “base” GT500 could accomplish on non-race performance tires. Just don’t slam the gas down, as it’s a beast. Several times, I rolled smoothly into what I felt must be full power, only to find there was yet loads more. Yikes! But you just have to love it. Even so, the standard model was steady and well behaved when hot-lapped at top speed—if a little soft in damping.

Leaving pit lane, I felt the thrill of anticipation, knowing how good that incredible chest-compressing urge would feel, combined with all the track-prep in this version of the big-boy Shelby. Pretty much, prayers answered. The float was gone and grip was way up, especially evident at the front (they had added negative camber, too).

The GT500 has that magic combination of steering response at the limit: the ability to tighten its line while loaded laterally in the middle of the corner, without losing grip at the back. The controllability that results is a pleasure that satisfies, all in spite of a considerable weight of 4,220 pounds. The ultimate Mustang wears its size well, with the strength and agility of an all-pro linebacker. This size means there is a lot of weight transfer in transitions, and the Carbon Fiber Track package version felt much more controlled than the standard model on track.

Of course, there’s stronger support from the springs and bars. I also expect the far lighter and very beautiful carbon wheels are part of the reason why the GT500 is such a track carver, too. The tremendous reduction in unsprung rotating mass they provide actually reduces the suspension forces that the shocks control and makes everything the GT500 does quicker and easier. This is also, no doubt, part of why this Shelby can match the brake points of much slower and lighter cars.

And this track version had real aero. The wing is straight from Ford’s GT4 race car, and the hood has a giant vent to send radiator air over the roof, not under the floor, where it causes lift. For track work, there’s a rain tray to remove, which normally shields the engine from the wet. These features do real work—they aren’t just decorative—and pay off the most in maneuvers like the awesome 140 mph-plus Climbing Esses at VIR.

Is the CFTP worth the bucks? If you plan to track your Shelby, absolutely yes. We saw about a 5-second decrease in lap times, with the same horsepower, which is huge. Does the standard version work? Also absolutely yes. These GT500s both move well from street to race course. The Carbon package just offers better everything.

The incredible performance capability of these two new Shelbys moves the Mustang into the supercar realm, it pleases me to claim. They will not disappoint. In fact, they both provide such thrills that they are a good value even at these prices, driving with confidence-inspiring and consistent speed that is rare to find at any price.